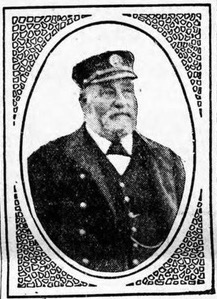 Peter, born on Tresco, Scilly in 1846, is the only crew member of LV50 we have been able to find a photo of. Genealogical research has shown his family historians his service with Trinity House, from lamp lighter to Master of the Breaksea Light Vessel.

Due to the small number of families on Tresco it has not been possible to clearly identify ancestors and wider family. The same names occur time and again and it is difficult with the level of detail in the parish records to ascertain relationships.

Analysis from the 1851 census shows that of the 395 people on Tresco at the time of the Census:
78% were born on Tresco,
12% elsewhere in Cornwall (including other Isles of Scilly)
10% outside of Cornwall.

Of those born on Tresco (336 individuals) the names Jenkin, Pender and Nicholls account for 49%.

Peter followed his father James into Trinity House service, as did his brother John, and they each served their working life in the service. Peter married twice but did not have any children. His daughter with his first wife was stillborn or died very soon after birth before she could be named: recorded as female born and died Q1 1869. His wife died a few months later. He remarried and acquired 3 stepchildren.

In December 1887 he, along with the rest of the crew of the Seven Stones lightship, was involved with the rescue of shipwrecked crew and sustained a broken leg, which featured in newspaper reports at the time: The Western Daily News and The Cornishman. There was also an article in the Western Mail in 1907 on his retirement, after 40 years of service.

In 1901 his daughter died at his home in Cardiff, within days of giving birth to her 4th child. Peter and his wife Mary moved to Mary’s youngest son’s home in Kent in 1907, taking granddaughter Violet with them.

Peter was born in 1846, baptised 26 November on Tresco, Scilly, son of James and Jane NICHOLLS.

James was baptised 16 Dec 1819 in Tresco, son of Daniel (a fisherman) and Elizabeth. It is unclear who his sibliings were due to the number of Pender families in Tresco at that time, and the common forenames used.

James died in 1853, buried at Tresco 25 October, aged 33. Leaving wife and 3 children, the youngest only 9 months old. On the baptism record of this child, he is described as Lightship man, so it can be assumed that he was serving on Seven Stones, being the ‘local’ light vessel.

James married 23 Feb 1846 on Tresco, to Jane NICHOLLS the daughter of Peter and Elizabeth, farmers of Town Hill, Tresco. She was baptised 20 Apr 1819. Nicholls is also a common name on Tresco, so again, identifying with any certainty other members of her family was not possible.

Census 1861:
Jane aged 41 was a widow, working as a laundress with son Peter age 14 working as an agricultural labourer and the 2 younger boys both still at school.

James is not found after the 1861 Census. There is a burial in Tresco 11 Sep 1869 of James Pender age 22, but Stephen Pender of Tresco also had a son James born a few months earlier, so it could be either one.

Census 1871:
Peter was not found. His mother, Jane, was visiting in Penzance on census night and younger brother John (18) working as Agricultural labourer, on Tresco lodging with Israel Odger, a cordwainer, who his mother married in April 1871.

Peter’s brother John Nicholls PENDER became a lighthouse keeper at Scilly Lighthouse 1881, St Agnes, 1891 Lowestoft 1901 and St Bees in 1911. At the time of his marriage in 1878 he was living in London, Occupation Light Keeper at Poplar. This was the location of a test lighthouse, where the Trinity House Corporation developed and tested their maritime lighting equipment in the early days of electricity and to train lighthouse keepers. He married in Paignton, Devon Rebecca SEAWARD b. 1855 Dorset, daughter of Coastguard, and they had 3 children: James G b. 1881 St Agnes, died 1902 Wales; Harold b. 1889 St Agnes, died 1973 Great Yarmouth, was a clerk in the brewery and Clarence b. 1893 Scilly, became a teacher and died 1973 in Reading. John died aged 87 in 1940 in Suffolk, and Rebecca 2 years later

Peter PENDER became employee of Trinity House as Lamplighter on Light Vessel at Seven Stones in 1881 & 1891 and Master of Breaksea, Cardiff in 1901.

9 years later Peter married widow Mary Ann JENKIN nee NICHOLLS, on 17 Feb 1878 in Penzance. Mary Ann was baptised 24 Sep 1835, Tresco, daughter of Barnet NICHOLLS (cordwainer) and Ann. Mary Ann was widowed in 1867, her late husband Hugh was a Carter. They married in 1860 and had 4 children. (more on them later). In 1871, after Hugh’s death Mary Ann was living in Penzance with her widowed mother and 3 surviving children, aged 9, 6 and 3, working as a greengrocer.

Peter and Mary Ann had no children together but kept close relationship with Mary Ann’s children.

1891 Census: Penzance
Peter was Lamplighter on board Sevenstones Lightvessel
Wife Mary Ann was at 28 Chapel Place, Penzance, with her widowed mother Ann, now 84, and her married daughter Sarah Ann MCINTYRE and Sarah’s children Archibald (5) Malcolm (3) Peter (2). The two eldest having been born in Amoy, China (now Xiamen), Peter in Penzance

Grandson Malcolm (14) was a scholar, lodging in Great Yarmouth with Elizabeth RIDLEY

1911 Census: Victoria Villa, Abbeywood, Kent
Peter, now retired, is living with wife Mary at the home of her youngest son Edward and his wife Fanny, along with Violet McIntyre (10)
Edward is a clerk in tea broker business.