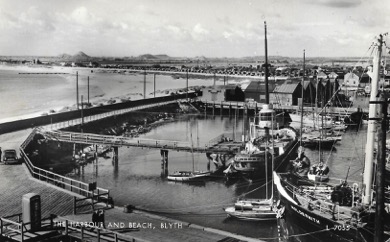 As with all light vessels, LV50 has changed her name as she moves from station to station, being the clubhouse for the Royal Northumberland Yacht Club (RNYC) is no different and she is now, following the demise of House Yacht (H/Y) Tyne, called H/Y Tyne III.

The demise of H/Y Tyne II

On October 27th 1949 her predecessor capsized and sank in Blyth harbour during severe gales that battered the country with winds reaching 90 mph. The yacht club steward and stewardess who lived on the boat were lucky to escape with their lives. In the words of the stewardess:

‘My husband awoke to investigate a pounding against the side of the ship. He dashed back and insisted we abandon our quarters immediately. He insisted there was no time to dress and dragged me off the ship. It was all over in less than two minutes’

‘As the tide receded it could be seen that the club ship had capsized, the falling tide gradually revealing her concrete bottom.’

During 1950 the club moved to temporary premises vacated by the RAF, at the end of the Middle Jetty, and started looking for a new floating clubhouse.

The Purchase of LV50

Towards the end of March 1952, the club heard of a light ship, LV50, lying in Harwich that was being auctioned off by Trinity House on the 16th April.  After a quick visit by a group of club members who concluded ‘the Club was unlikely to find a better type of vessel today, or in the immediate future, for their purposes’; it was agreed to bid £350 (£9,250 todays money) for her.

The bid was unsuccessful, and she was bought by an Ipswich scrap merchant who was interested in the engine room equipment and the main winch which could be removed with very little damage to the rest of the ship.  Following negotiations, the merchant agreed to sell on the ship for £600 (£15,800), leaving in the chain ballast.

Dry Docking and Fitting Out

When LV50 arrival in Blyth it was an opportune moment for her to be checked out and ‘heavy work beyond the scope of amateur labour would also be carried out’ by Blyth Dry Dock and Engineering Company in October/November 1952. This work included: inspection and repair to the Muntz metal sheathing, fitting a rubbing strake to the port side of the hull and ten 14” round port holes being fitted on the starboard side. A section was also cut out of the steel deck house to be glassed over ‘to ensure maximum daylight’ for the main saloon.

Work continued on the ship before she was used as a club house. Amongst other work two port holes were cut in the foreward compartment in December 1953.

In July 1954 the ship was opened for use by club members in time for the Blyth Regatta. In 1955 she was re-ballasted with 6 tons of granite blocks (from Northumberland Street in Newcastle), 1956 the new deckhouse extension was installed and in 1957 the ‘Penthouse’ was constructed, raising the cadet’s quarters, above the steward’s quarters, by 15”.

During March and April 1960 the ship was dry docked in Blyth and she was found to be in good condition.  At this time it was decided to remove the skylight and construct an office over it.

The wreck of the old club house continued to be a problem. It blocked the jetty where they wanted to put LV50.  Discussions had been ongoing with Blyth Harbour Commission (BHC) about removal of the wreck and they had informally agreed that the port would try to remove the wreck as and when the resources were available. On this basis parts of the wreck were removed but ‘the main trouble now being that the centre section would not lift as the chains when in position cut straight through’.

It was finally decided by BHC in late 1957 that ‘that the cost of removing the wreck was far in excess of any estimate and while he and others would do their best for the Club, as a public authority the powers of officials and commissioners were limited’ and that the ‘account for the removal of the wreck must shortly be rendered’.

By May of that year the wreck had been removed and the site dredged and H/Y Tyne III moved to her ‘final’ position.

Most of the history of LV50 since she came to Blyth has been reconstructed from the minutes of the RNYC between 1949 and 1961. By 1962 she had essentially the outside look she has now.  The internal organization of the ship, at this time, was continually evolving to meet the clubs changing needs.

However, work is ongoing with the more recent minutes to complete her history. We know she was dry docked again perhaps in 1962 and certainly in 1976 but we don’t know if this was just to check her out and if she was further modified internally.

In May 1996 Blyth Marina was redeveloped and she moved off the old jetty to her current location.